skip to main | skip to sidebar

Red-breasted Sapsuckers---drilling and waiting for dinner

Woodpeckers have always been the most interesting species of bird to me. Ever since growing up on a large Oregon family farm in the Willamette Valley I remember the excitement in seeing them in the forest around our lake, or seeing Pileated woodpeckers in our apple orchard. Locally here in the Snoqualmie Valley we are blessed with no fewer than five species of woodpeckers in the surrounding open mixed forests. One which leads a more quiet life happens to be nearly my favorite---the red-breasted sapsucker.
These beautiful birds have red heads and breasts and can be confused for no other species of woodpecker in our region (the red-headed woodpecker is an eastern US species). They also have virtually no noticeable differences in appearance between the male and female (very unlike the common hairy and downy woodpeckers that are common around here). Dense mixed and conifer forests typical of western Washington are a favorite home for them---sounds a lot like our surrounds here indeed! They get their name “sapsucker” from the foraging behavior which they follow. This consists of drilling orderly horizontal rows of holes into tree trunks and then returning to those holes later to feed on the running sap and the insects attracted to it. Very different than most woodpeckers, they forage in healthy trees and it is actually possible to kill a young tree if they drill too many sap-holes around its trunk. This, however, is quite uncommon and shouldn’t be something to worry about. Most if not all western red cedar trees that you see in a healthy forest will have thousands of these holes ringing the trees! You won’t find them dying anytime too soon from it either. Even a small flowering cherry tree in our immediate yard has become a favorite drilling/foraging zone for a resident bird on our property. This tree sap is the main food of red-breasted sapsuckers. They also eat some insects and fruit. They will enjoy more insects during the nesting season and they primarily will feed insects to their young.

These busy birds are very resident neighbors and don’t move around much nor migrate. They are common in the lowlands of Western Washington even in winter. However, if the weather turns cold enough for sap to freeze, they may move out to the outer coast to find food.
Lastly, they are considered a “keystone” species. This is significant because it means that many other species use the sap wells they drill. So the next time you hear a polite hidden “tapping” sound going on and on in a cedar tree nearby take the time to look more closely. You might find one happily showing you that your home is a healthy part of the ecosystem as well!
Posted by Alan at 10:42 AM 4 comments:

I so clearly remember the afternoon about 20 years ago, working in my yard. I was rummaging around some old rotting logs that were mixed in under a thick growth of salal when suddenly something quickly moved and stopped. I immediately of course assume “oh, yet another garter snake”. But then I looked more closely: what WAS this thing!? I was thinking “salamander” but no, it sure wasn’t that either. After getting photographs developed (yes, this was WAY back in ancient times of only shooting with film!) I finally figured out that we have lizards around our neck of the woods! Yes, the Northern Alligator Lizard is a remarkable reptile that is fairly common but usually hidden from view.
The Northern Alligator Lizard ranges up to 13 inches in length. However all of the specimens I’ve witnessed over the past 20 years have been in the 7-8 inch range. This alligator lizard species prefers our cool shady forests. They range from the southern portions of British Columbia down through the Pacific Northwest. One thing that makes the Northern species stand out from others is that they give birth to live young. The Southern Alligator Lizard and most others lay eggs. Northern Alligator Lizards are found in cooler and wetter environments than most any other species of lizard. They are often found in forest clearings or edges, under logs and other surface debris. They can also be found in talus slopes that are associated with forests. And what an amazing banquet of foods they eat. They feed on a wide range of little critters such as insects, ticks, spiders, millipedes, and snails. Thus I’m a very huge fan of these amazing creatures if they eat ticks---one of the few things on this earth that I completely detest!
Able to reproduce each year, they have anywhere from one to eight young. I was surprised to learn that they have a life expectancy of up to eight years. You may not have ever seen them before, but it isn’t likely due to your not paying attention. They make extensive use of cover such as rocks, logs, and shrubs. But they don’t go far either. Most individuals are site faithful, remaining in the same area (within a 100 foot radius) for three consecutive years. I was greatly humored over one last fact about them which was news to me: lizards with shorter tails have slower sprint speeds. I’m still trying to find out more detailed information to know WHY this is the case, but it was fascinating nonetheless.
So get outside this summer and kick some rocks and logs around a bit. Snoop around in some dark corners of your property if you border forested areas. You just might be able to startle yourselves and see these hidden creatures of our unknown world! But if you so choose to please handle them very carefully, if at all. Alligator lizards have a tail that easily breaks off and they also have strong enough jaws to give a serious bite!
Posted by Alan at 12:32 PM 20 comments:

Flashback Photo of the Day: 03/14/2005 - I've been sad with the thought that my parents didn't make it to Arizona this winter. So it is a pleasure reflecting back to my very first Arizona visit to see them six years ago and sharing sunset with them in Saguaro National Park. What a sunset we had on Signal Hill overlooking the forest of Saguaro across the valley.

It is hard to imagine that after this spectacular

early evening calm sunset, we drove back north to the Phoenix area in a huge sand/dust storm on I-10 that reduced visibility at night down to maybe 100' at most! I can see how terrible things can happen driving in those conditions. (all photos from the western unit of Saguaro National Park, Arizona)
Posted by Alan at 11:16 AM 3 comments:

Valentine's Day is special for most people, and for me it takes on even a more special meaning. That is, I am so happy to yet again have Valentine’s Day to also give special time to my wonderful birthday-pooch-border-collie-I’m-smartest-in-the-household wonder pup (b. Feb 14, 2002!!) and let her know how much she has meant to my life the past nine years. I took her on a short special birthday hike yesterday, wet and sloppy, and a big thank you to her for making this dog-loving guy feel so special too! Happy Birthday! (last photo: May 2002 and the little fur ball of energy and love!) 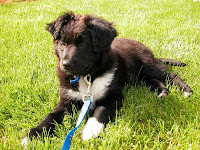 A "Different" Kind of Robin - the Varied Thrush

There is a special call from nature in winter in the lowland hills around the Snoqualmie Valley that is one of the top five favorite sounds of nature to me. I love the Pacific tree-frogs calling in spring; I love the sound of Pileated woodpeckers. But the winter arrival call of the Varied Thrush is just so special, I can’t ignore it!
The Varied Thrush can best be described as being close to looking like the size of an American Robin. However it is smaller and much more striking in appearance. They display a lovely bright orange wing bar, an amazing orange throat area, black bar along the head by the eyes, and a bright orange under-part belly. The female birds are still brilliant but the orange is more subdued. A breeder of the Pacific Northwest and areas northward toward Alaska, it really is a mystery bird to many, one that lives out its life in the dark deep coniferous forests. But winter in the Cascades brings it to the lowland forest fringes and here we find it in our own yard like many forested foothill communities!
What makes it so easy to locate sightings of them in winter here is that they are ground foragers primarily, so if you feed birds in your yard or on your property, they are very likely to find the area on the ground around feeding stations as winter territory to claim. The males do tend to dominate many other bird feeder species and claim small territories around feeding areas, so if you have multiple thrushes around it can be quite a show! Along with the seeds they find, they also feed heavily on any types of ground insects that can be found. Summertime in the mountains they are up high in the trees nesting and it can be far more difficult to spot them. Oh, but for that special voice they have, it is a dead give-away of their presence! It can best be described as a strong single note/pitch of a “whistle” call – almost to me sounding like a referee at a basketball game, starting weak and getting strong quickly! This is what makes these birds one of my favorite winter creatures to have as a natural neighbor, and I encourage you to find a voice call recording on the internet to enjoy if you don’t know what I mean (http://identify.whatbird.com/obj/200/_/Varied_Thrush.aspx is one of many). Ahh…can you hear it? I hope you see these around the fringes of the Valley, and that you keep me posted on what you are seeing (or hearing) out there!

Flashback Photo of the Day: 01/22/2008 – After I had been photographing the amazing ice jam details in the Yakima River for almost 45 minutes in the -2* temperatures I headed back along the river/road area to where I had left my truck parked off the road. It was crossing the road here to get back into the truck that the view right on up the road in the Yakima Canyon seemed so surreal to me. I kept on walking, got in the truck, and then realized I had another photo I wanted. This was the image I shot…after letting a passing farm truck of hay pass by first of course! But traffic is light in the canyon on cold January mornings.
Posted by Alan at 5:08 PM No comments:

Flashback Photo of the Day: 01/22/2008 - Returning early morning from a previous night's presentation in Yakima I headed back to Ellensburg like usual via Canyon Road through the Yakima Canyon. Extremely cold weather the previous week had left miles of massive ice jams on the scenic Yakima River offering me photographic opportunities never seen before in this, my favorite canyon drive in Washington State! (second photo: remaining ice after the warm-up broke up the river - this ice was pushed up high on river banks )

My books available for purchase

Alan
Alan L. Bauer is a professional freelance photographer specializing in the natural history of the Pacific Northwest and coverage of local history. He is a lifelong resident of the Pacific Northwest, having grown up on a large family farm in Oregon's Willamette Valley and now calling Washington state his home for the past 22 years. For a complete biography about the work of Alan L. Bauer please enjoy a visit to http://www.alanbauer.com/Biography.htm

Websites worth your time